Posted by codereflection in Musings on October 4, 2012

Being a bit of a font geek (a little, not much), I am always on the lookout for a better coding font.  As a long time user of Microsoft’s Consolas, and Damien Guard’s Envy Code R, I was excited to try out Adobe’s new entry, Source Code Pro.  I always want to see a comparison between what I use and the new font in question. So here are the comparisons: 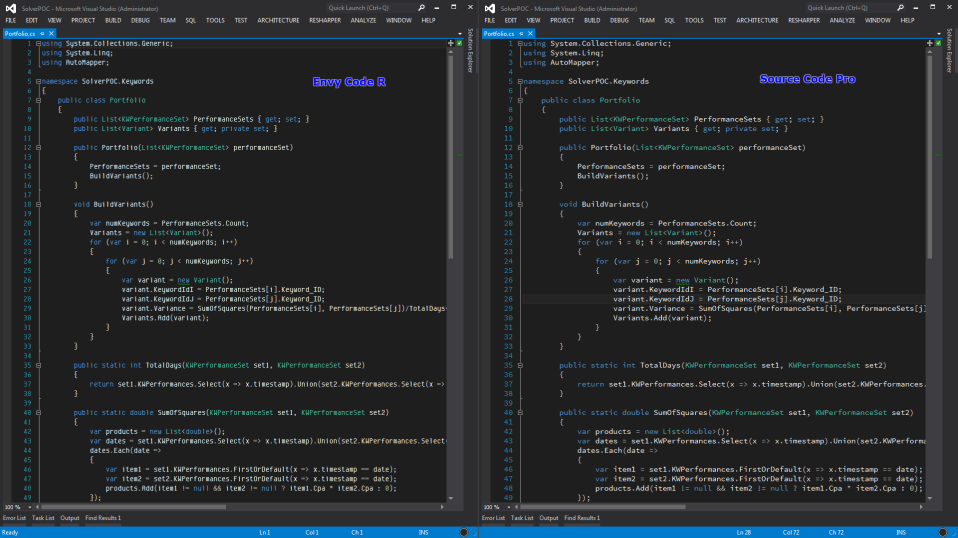 The first thing that I notice between Envy Code R and Source Code Pro is the difference in width.  I have both of these dialed up to 11. Envy Code R is a little more subtle on distinguishing letters which can be commonly confused, such as 1 and l, O and 0, and so on.  Even though I can fit more code on the screen with Envy Code R, it might be worth trying Source Code Pro for a while to see if it is generally easier to read.

Next we have Microsoft’s Consolas vs Adobe’s Source Code Pro.  Again, more code fits onto the screen with Consolas over Source Code Pro; not only horizontally, but also vertically. I do like the sweeping bottoms of Source Code Pro’s lower case L and I over Consolas, which are conversely flat. Compared to Source Code Pro, Consolas just looks harsh.  Of course it’s not nearly as harsh as something like Courier New, but in this comparison, it’s clearly not the winner.

(Source Code Pro on top, Consolas on the bottom)

I’m pretty much over using Consolas. It’s still a nice font, but when I start to focus in on the parts of it that I really don’t care for, those parts become difficult to ignore.  Envy Code R is my font of choice, but I will give Source Code Pro at least a week of trial before giving it a final thumbs up or down.